I admit to being one, and I’m going to submit strong evidence in support of you being one, too.

As many of you know, one of my interests is birding. “What is birding?” some of you are asking. My earliest avian-studies mentor, the late Judith Toups, used to say there were three levels of bird-interest enthusiasts.

The first was backyard birdwatchers. These are folks who feed birds and look out at the feeder on a somewhat regular basis, but they’re not going beyond the yard to make a feathered friend.

The second level is a birdwatcher, no qualifying adjective. Birdwatchers typically have a pair of binoculars and may infrequently go on outings to find and look at birds.

The third level is birders. Think “woodworkers.” Obsessed. Willing to spend large amounts of money on equipment. Able to spend hours and hours in pursuit of perfection. I think the woodworkers in the audience have the concept.

A few months ago, my wife, Brenda, and I went on a trip, a vacation, a chance to sit around and do nothing.

Unfortunately, doing nothing is not something I’m good at. Fortunately, the place we went has good birding, so I had plenty to do. Being a beach location, one can sit in his condo and watch osprey, gulls of several species, egrets, herons and other shorebirds without ever leaving his room. It’s almost like doing nothing, while expending just a little effort.

I did some of that, but I also spent a good bit of time wandering the island in a more adventurous mode. That meant a backpack, water, binoculars, camera, spotting scope, a tripod and lightweight portable seat. About a 26 pound load.

To get all that stuff to and from the destination, I used all of the skills my Navy corpsman father taught me about packing a suitcase. My tripod was nestled in one leg of a pair of jeans, and the seat was in the other leg, with all of that surrounded by other clothing. Somehow, on the return trip, baggage handlers managed to break the plastic handles on a wing nut which was part of my tripod. 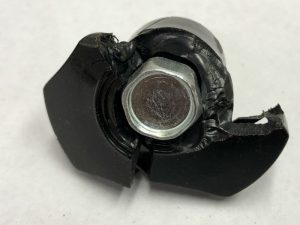 My tripod is old, a Vivitar that is no longer manufactured, and the Vivitar company is out of business. In other words, replacement parts are not available. How was I going to fix this crucial adjustment part?

Of course, when I returned home, the first order of business was business. After 8 days out of town, there were plenty of appointments when Monday morning came calling.

Likewise for Tuesday through Saturday.

But, Saturday afternoon I had time to visit the garage and begin to ponder a repair process. Step One was to determine the thread type. Good! It wasn’t metric! That piece of information alone gives you a hint as to how old the tripod must be.

Since a 5/16″ nut fit on the broken wing nut, which is actually a bolt, I began looking at my supply of adjustment knobs I keep for assemblies. Darn! I had every configuration of knob except one that would work.

Plan B: Dig through the supply of 5/16″ bolts and figure out a way to attach a “handle” to it. Then, what should appear in the pile, but the attachment knobs to my old Lowrance paper graph. Non-fishermen call them “fish finders.” When that albatross died, the only usable parts were the “U” bracket it was mounted in and the knobs that attached it to the bracket.

Moment of truth: will the threaded part be the right length? It worked! 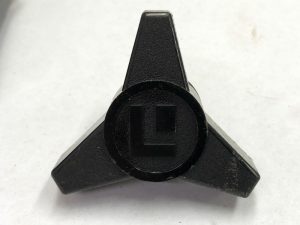 I’d saved those knobs for over 20 years, but the effort finally paid off. This Lowrance part was going to save my Vivitar tripod!

A week or so later I found myself looking for old, saved valuables again. The chain-link fence gate at our clinic had rusted and needed to be rebuilt. Having installed the original fence, I knew I had fence parts somewhere. Out of a pan of elements I was able to find enough corners and brackets that all I had to buy was some new pipe. 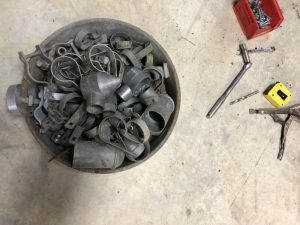 “Thar’s gold in that-there pan!” I just had to save those parts a few decades to come up with an almost free new gate.

“Never throw anything away.”

Having been raised by five children of the Depression, I’ve heard that all of my life.

In the span of a couple of weeks, the practice proved itself right again. 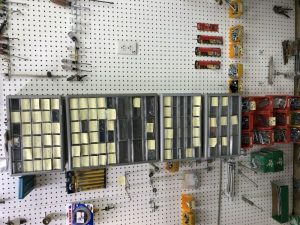 While many of these little plastic drawers have new supplies in them, there is a lot of vintage treasure, too.

6 Responses to “January Poll: Are You a Packrat?”