People are of two minds about sharpening, I believe. Some hate sharpening. They despise having to stop working, even though they realize that sharp tools are safer and easier to use. Like other necessary things we wish we didn’t have to do, we recognize the value, even as we’re wishing.

Others might not mind sharpening, but I don’t think anyone loves it.

I’ll go one step further: I believe the former group struggles with getting a good edge and the latter is good at sharpening.

Sadly, I’m in the first group.

For a long time, I was looking for a way to sharpen that wasn’t just easy, it was automatic. I got some really good advice from my friends Steve Johnson and M. Scott Morton. It can be summarized with an old saw: “If it sounds too good to be true, it probably is.”

We conversed about machines that might help, and they encouraged me to just concentrate on hand sharpening with stones. And, to practice, practice and practice some more.

Not long after that I was watching a Matt Cremona video, and noticed he had one of those little blocks some folks use that sets the distance from the front edge of one’s chisel to the sharpening jig. Having that jig allows perfect repeatability for the sharpening angle. I made a block like that for 25i and I was off to the proverbial races. It seemed I could do no wrong in sharpening my chisels.

Then, one day, something happened. I sharpened a chisel I’d put an edge on with that same technique, and it wouldn’t cut worth a hoot. I figured I’d just gotten in too big a hurry, overconfident, and messed up the edge. So, I went back and honed it up from 1000 to 8000 and tried again.

Some people just have it. I took a class at Arrowmont College once, and the instructor was working with one of my chisels and said, “I just can’t use this. Do you mind if I sharpen it?” What was I going to say, “No, I like it like that way?” She took it to a high-speed grinder and shaped it the way she wanted it. No, she did not blue the edge. She spent a few minutes on a wet stone and the chisel cut like she’d been honing for hours. I asked her to sharpen two other chisels, which she pleasantly did, spending about the same amount of time on each one.

I’m not exaggerating when I say I didn’t need to sharpen one of those chisels again for a year!

After Steve Johnson did a video review on the Tormek T-4, I thought it might be just the breakthrough that I needed, a machine to get a good shape on my chisels and plane irons that would allow me to just fine-tune on stones.

It might still be my sharpening salvation, but I’ve been so busy since it arrived that I’ve only had time to unbox and assemble it, and there hasn’t been time to do anything else with it. 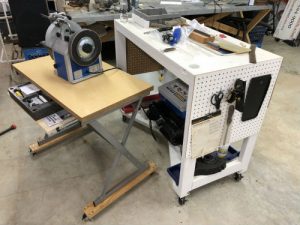 It didn’t take long to figure out the Tormek Sharpening System can’t be up as high as sharpening stones. I found this desk up the street when some folks moved out in the middle of the night and left a lot of their stuff for the garbage man. With a top and some wheels, I hope its height will be ideal.

Maybe I can become one of those people who is good at sharpening and doesn’t dread it.

I’ll let you know when I do my review of the new Tormek.

13 Responses to “August Woodworking Poll: How Do You Make Yourself Stop To Sharpen Your Tools?”