Do you use the built-in ruler on your saw fences?

Many people don’t trust them, especially when they need a super-accurate cut.

Whether on the table saw or miter saw, some use a rule to measure the distance between the blade and fence.

And, certainly, that’s the way to get the best-fitting parts.

I spent a lot of time calibrating the scale on my Delta cabinet saw, and it’s quite accurate, but it’s set for my Forrest Woodworker II. If I use my thin-kerf, coarse-tooth Craftsman blade, that measurement changes. I use the scale only when the cut doesn’t have to be perfect.

It takes little time to make that measurement, and, if you’re batching parts, you need measure only once.

It would take a lot longer to make all those pieces a second time. 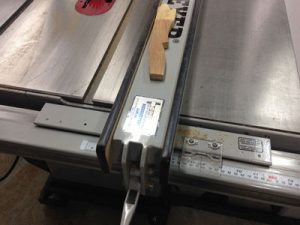 I’ve fine-tuned the scale on the Delta cabinet saw to its best accuracy, but I still measure the distance between the blade and the fence when cutting furniture parts.

I put a scale on my Norm Abram miter saw stand, but I don’t use it. The plans included instructions for a movable stop, but, when I got through with the project I was out of time and never got around to making that clamp.

I would use the stop, if I ever got around to making one, because I perform a lot of repetitive cuts. However, I still measure the distance between the blade and the stop, despite the fact that I’ve checked the tape repeatedly, and it’s always right on the money. 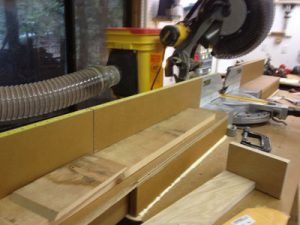 The tape on this Norm Abram-style miter stand is very, very accurate, but I still don’t use it.

One day I’ll make Norm’s movable stop, but, in the meantime, this setup works quite well.

And, what do you use to measure? I’m not trusting of tapes when perfection is on the line. After all, a movable hook is the antithesis of accuracy. I will use a tape and start at the 1″ mark sometimes, but that doesn’t work when measuring against a blade or fence.

That’s when I drag out my father’s old folding rule. There’s no disputing the meaningfulness of a measurement from one of those! 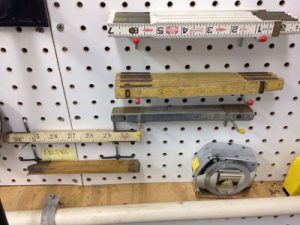 I often keep a folding rule in my pocket when building furniture. Their accuracy is without peer. The bottom four were Daddy’s. He’s 95 and still very spry, but no longer needs his measuring tools. We are blessed.

17 Responses to “POLL: Do You Use the Built-In Ruler On Your Saw Fences?”