I recently started a log called, “What I learned during this project.” What was the inspiration for such a file?

I was assembling the stool pictured below when I realized that not only had I swapped the left and right legs, I had the middle panel in backwards, too.

At least the top was on top!

Fortunately, the legs’ thicknesses were within 1/64″ of each other. Still, I had cut the mortises using relative dimensioning, a slightly narrower mortise for the slightly thinner board. Since the whole leg was the tenon, there was no shoulder to cover imperfections in the mortises.

As Popeye once said, “All’s well that ends in the well.” While one leg was a little tight and the other was quite loose, you can see that there isn’t enough difference to even detect in the photo. 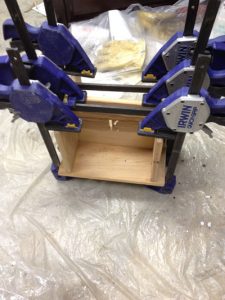 Distractions caused me to switch positions on these project components. Lesson learned.

By the time I realized my mistake glue and clamps had been mobilized, and there was no way I was going to try to take anything apart. In the heat and humidity of South Mississippi, chemical reactions happen very rapidly. While it may take hours before glue is cured, only seconds need pass to prevent repositioned parts from being reseated in their intended locations.

After the clamps were on, there was time for reflection: “How in the world did this happen?”

I believe I know.

A while back I wrote about watching television during mindless tasks like sanding. Now, I believe I’ve let that practice bleed over into duties that require more of my attention.

Here’s what really brought it home for me the very next day: I wheeled my hand truck across the garage floor toward the south wall. The hand truck hangs on the frame of the wood storage rack on that wall. The stench of mold from my late mother-in-law’s coffee table was heavy in my nose. Moisture in the storage unit had not been kind to its particle-board construction. The smell made me realize, “Wait, where am I going? I’m not headed to hang up the hand truck, I’m putting this moldy furniture in the trailer, and I just walked right past it!”

Listening to a podcast, I was paying so much attention to what the participants were saying that I totally spaced out on the simple task I was doing.

How much easier, then, to slip up and make a mistake on a project?

I’ve resolved to limit podcasts and videos to truly mindless tasks, like sanding. 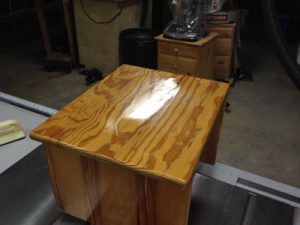 For 150-year-old pine this child’s stool project must be OK, as its recipient likes it. 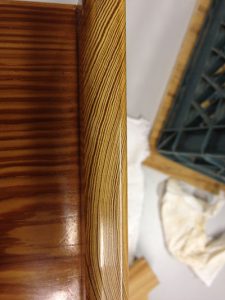 My favorite part of this old, old pine: the end grain finishes so beautifully.

Another resolution I made: Use painter’s tape to identify pieces. On this project pencil marks on the ends of tenons and inside mortises specified location and direction. Chalk on the large area of a panel denoted left and right. For me, the chalk rubbed off too easily. And, the pencil instructions were on parts that were hidden during dry as well as glue-up assembly. IDs written on 2″ pieces of tape will be nearly foolproof, helping to minimize mistakes.

We encourage your comments below. How do you avoid mistakes in your projects?

5 Responses to “POLL: Do Distractions/Interruptions Cause You To Make Mistakes?”