We’re pleased to announce our schedule of woodworking classes for the first quarter of 2009. Woodworking classes are held in two classrooms at our store at 1045 N. Highland Ave, Atlanta, Georgia, and are open to the public. Space is limited, so it is important to register early to reserve a seat. Click on each woodworking class name for more information and registration information.

Our Tormek wet grinding system continues to draw accolades from independent rating services. Most recently Wood Magazine rated the Tormek T-7 its “Best Buy” in woodworking wet sharpening systems. In this case the honor carries special distinction, for despite its premium price tag, the Tormek sharpener was still the Editors’ first choice for greatest value in relation to its dollar cost. In the words of the Wood Magazine Editors:

“Price often indicates quality, and we certainly found that to be true in wet sharpeners. Tormek’s heavy-duty T-7 proved impossible to stall, no matter how hard we pressed on the tool during sharpening; none of the lower-priced units even came close. Its tool-holding system (tool rest and holders) fit together like hand in glove and gave us dead-on bevels and square ends with little fuss. And the stone wore much slower than less-expensive models we tried. If you sharpen hand tools or knives at least once a week, the versatile T-7 is the sharpener for your shop.“

In judging the Tormek’s outstanding performance, the key word has always been repeatability. With the Tormek, the woodworking tool is guided while secured in a dedicated jig, allowing you to accurately remove only a tiny fraction of the steel during each sharpening. This not only saves valuable time, but also allows your woodworking edge tool to last many years longer since it grows only minutely shorter with each successive sharpening.
The Tormek enables you to tune your woodworking tool exactly to your needs. Complicated shapes such as fingernail turning gouges, spoon carving gouges and oval skew chisels with radiused edges are often cause for consternation among woodworkers. With the Tormek, these tools are easily ground for optimum edge geometry, after which the blade can be honed to a precisely sharpened edge. After the shape has first been created, that edge can then be resharpened in a matter of seconds whenever necessary.
The Tormek’s water-cooled slow-speed grindstone works in harmony with the physical laws that preserve the integrity of the woodworking tool’s steel. The edge is prevented from overheating and thus avoids losing any of its inherent hardness.
The Tormek’s water-lubricated grindstone works in tandem with the leather honing wheel in the same exacting manner as a woodworker would approach traditional benchstone sharpening, except in this case the Tormek’s motorized function speeds the sharpening process considerably. After the tool has first been initially shaped and generally sharpened, the woodworker then impregnates the leather wheel with fine honing compound which allows him to further polish the edge to razor sharpness.
Operating the Tormek wet grinder at low speed allows one exquisite control over the entire sharpening process, and further avoids the creation of sparks, which allows the machine to be safely used even in areas at high risk of fire. The wasted steel particles are deposited into the Tormek’s water trough along with particles abraded from its grinding wheel, thus preventing the formation of an unpleasant cloud of grinding dust as the machine goes about its work.
Highland Woodworking has been selling the Tormek Sharpener to satisfied woodworkers for almost two decades. We have yet to find a faster, more efficient or more reliable system to serve the needs of our customers.

*Merchandise total must be $100 or more prior to addition of shipping charges for discount to apply. Sorry, no adjustments on prior sales. Offer excludes items with flat rate shipping adders, freight collect shipments, expedited shipments, international shipments and special order items. Offer does not apply to shipments outside the 48 contiguous United States.

Dear Woodworker,
In these tough economic times, we at Highland Woodworking would like to do our part to make shopping with us more economical and convenient for our customers. Currently we are providing FREE GROUND SHIPPING on most orders over $100* delivered within the 48 contiguous United States.
As always, with our product offering and staff expertise, our goal is to guide you in making sure that your tool and supply purchases from us meet your expectations and support the success of all your woodworking endeavors.
As Highland Woodworking enters its fourth decade of serving woodworkers across the country, our aim is to provide you with the same personalized service and support as we have been doing since we first entered the woodworking tool business back in 1978.

*FREE GROUND SHIPPING TERMS: Merchandise total must be greater than $100 prior to the addition of any shipping charges for free shipping offer to apply. Free shipping offer excludes items listed in our catalog or on our website with flat rate shipping adders, freight collect shipments, expedited shipments, and special order items. Actual shipping and handling costs are charged for shipments outside the 48 contiguous United States. For orders under $100, please refer to our standard shipping rate table.

Some people are luckier than the rest of us. When it comes to winning contests, Patricia and Mike Mortimer fall into the lucky category. Patricia entered Highland Woodworking’s Win a Festool Package Sweepstakes and was the lucky winner out of thousands of entrants. She’s shown here being congratulated by Chris Bagby, Highland Woodworking’s owner and co-founder. It wasn’t just the first contest Patricia has won. Among other things that she’s won are a flat screen television and an all-expense paid trip to Bejing, China to attend the 2008 Olympics. We asked her how she did playing the lottery and she replied “I don’t play the lottery. You have to pay to do that!”

Mike works professionally doing commercial repair and finish restoration on furniture, cabinets and interiors. He is actually known for being quite the “magician” when it comes to recreating grain patterns and surfaces that have been damaged or distressed. When asked, both admitted that they were not really sure what projects they would attempt first with their new woodworking equipment. One thing for certain is that they’ll definitely have room for it, as they have a 2400 square foot shop! After mentioning projects like chairs and end tables, they both joked that given the space they have, perhaps they would make a gazebo for inside the shop.

Since Highland Woodworking is well known for its Education Program, which includes a wide variety of classes for both beginners as well as advanced woodworkers, hopefully we will see both of them soon in some of our
upcoming classes for a chance to study woodworking with our knowledgeable instructors. 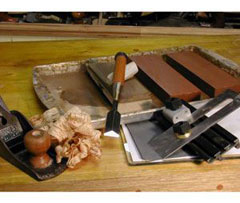 One of the biggest challenges for beginning woodworkers, and for some old-timers as well, is keeping their chisels, plane irons and other cutting tools sharp. Our large in-stock selection of sharpening devices offers a variety of solutions to fit every need, plus over the years we’ve published a number of articles covering a variety of hand tool sharpening techniques. Here are links to a few of them:


A Guide to Sharpening Chisels and Plane Irons


GATEWAY TO OUR
ONLINE CATALOG OF SHARPENING TOOLS

Visit our huge archive of
woodworking tips, articles, and Q&As

Our big new Fall 2008 woodworking tool catalog is at the printer and will be mailing out in just a few days. It’s loaded with a huge selection of woodworking tools and supplies, and also contains a listing of the dozens of upcoming woodworking classes and workshops held at our retail store in Atlanta, Georgia. We invite you take an online look at our woodworking class schedule.

About 6 hours ago from Highland Woodworking's Twitter via Hootsuite Inc.

About a day ago from Highland Woodworking's Twitter via Hootsuite Inc.