One of the earliest challenges I had in woodworking was deciding how to store sandpaper.

Disks for random orbit sanders come in boxes. The disks curl, like all sandpaper, but it’s OK because the platen flattens them back out again.

Sandpaper pre-attached to sanding blocks stays flat, but it seems to be such a wasteful way to purchase sandpaper. When the grit is used up you have a big chunk to put in a landfill. That just doesn’t feel good.

The day I realized 9″ x 11″ sandpaper would fit a gallon zipper-locking bag, I thought my sandpaper-storage problems were over forever.

That illusion lasted about 24 hours. Given South Mississippi’s heat and humidity, it’s a bit surprising it took that long to turn them into a bag of potato chips.

However, I stuck with that system for years. It was transparent, so I could see the size and color at a glance. It took up almost no room, well, except for the real estate on one wall. Also, that wall was close to where I most often sanded, making it easy to change grits or renew with a fresh sheet. 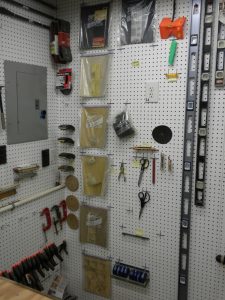 My first attempt at sandpaper storage. Mostly used zipper-locking bags filled with sandpaper bought in bulk with an effort to keep it from curling by holding it against the wall. In retrospect, I’m pretty sure screws would be required to keep sandpaper flat!

At one point I moved the Ziplocs to the rolling stand my oscillating spindle sander lives on. I already had sanding disks in the drawers, so it just made sense to have all of the sanding resources in one place. 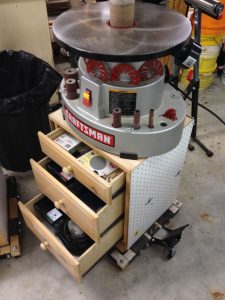 I made this stand from a “solid wood furniture” bedside table that Brenda bought. With a Universal Mobile Base under it, it’s an any-terrain, go-everywhere tool stand. Once, I even rolled it out to the deck to sand some treated lumber. Sanding disks are in the drawers, along with the Porter-Cable sander that went into semi-retirement after Festool sanders took over.

Still, I longed for a better means of storage, one that would achieve that Nirvana-state of perfect sandpaper flatness.

I was making a filing system for shop tools one day, when it hit me: “I can put sandpaper in these hanging folders, push them to the back of the box and they’ll stay perfect. And, with labels on top, it will be easy to see which folder holds the grit I’m looking for.”

That system kept the sandpaper flat longer than the Ziploc system.

That’s when I realized it was going to take some real force to stop the curl.

Months went by, and I thought about alternatives a lot, but wasn’t coming up with any new ideas until I picked up a couple of drawers in someone’s trash one Friday morning. I didn’t know what I was going to do with them, but they were too big and too well-made to let go of. I’ve had been stepping over them for close to a year, but one day, sandpaper in hand, I looked down at the drawers and saw my solution: “A box, 9″ by 11″, with a heavy weight on top.” 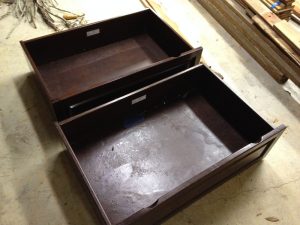 Unintended consequences with a good outcome: these so-far-useless, in-the-way drawers served to inspire me to a solution for keeping sandpaper flat!

Now, if I could just find a discarded drawer or a wooden box with those dimensions I’d be in business! Then, one Saturday morning, I walked past the solution, and it was right in my shop: an old milk crate. Even better, it had a handle for carrying!

The first iteration sent the sandpaper back to Ziploc bags. They were already labeled, so it was just a matter of transferring them out of their folders. 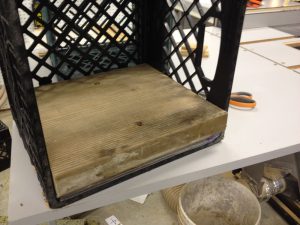 A milk crate is the perfect dimension for sandpaper sheets, and this concrete-form 2×12 cutoff is just the right amount of weight to hold the paper flat. 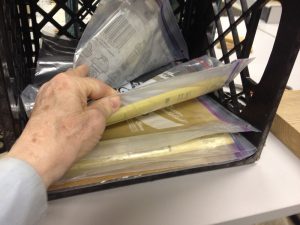 See how nice and flat this sandpaper is? Finally!

Which, by the way, should have told me something, because, months later it occurred to me to put them back in their “hanging” folders, which then gave me ready access to the grit I needed.

No, it’s not pretty, but the price was right. I found the milk crate in someone’s discarded trash. The 2×12 is left over from the construction of our home. Someday, I might sand and paint it. I might even make a proper wooden box with a handle. 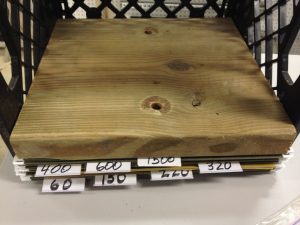 Going back to storing sandpaper in tabbed file folders allows me to quickly find the exact grit I’m looking for.

But, probably not. The sandpaper stays flat just fine like it is.