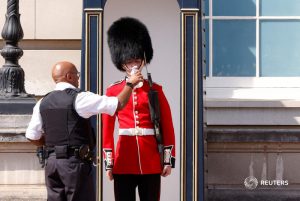 It’s getting hot in here!

This is the first summer I have spent significant time woodworking. I work in a garage without any kind of environmental controls beyond raising and lowering the garage door or cracking a window. What I have learned quickly is that it gets really hot, really fast! I thought surely there must be some tips for managing the temperature in an unmanaged room, but it turns out a lot of people manage it by just not woodworking at all, especially in sunbelt states like mine. While I have by no means solved making sawing away on a balmy summer afternoon pleasant, I have discovered a few things that make life a little more bearable. To start, a little about the space itself.

I work out of a 2 car garage with 2 windows facing the street and a garage door orthogonal to the windows. There is a 120v wall outlet between the windows and one perpendicular to it on the opposite wall for a grand total of 4 outlets, all on the same 20 amp circuit. The space was originally a carport that was converted into a garage, which no doubt influenced some of the interesting electrical and materials choices.

The simplest solution would be a window air conditioning unit. Unfortunately, with such a shortage of power in the garage it would be a bit difficult running anything in addition to the A/C unit. For instance, I have a 120v table saw that when cutting with a shop vac running will trip the breaker when cutting harder material like maple or bloodwood. Add an A/C unit to the mix and it will probably trip the breaker when I look at my tablesaw.

The other issue with a window A/C unit is cub appeal. Since the windows in my garage face the street I’ll either repel my neighbors with the unsightliness of it, or attract burglars by proudly announcing; “See this garage with the fancy A/C unit? It might have stuff in it you can pawn!” Of course I keep nothing in my garage and move tools in and out as needed. Sufficient to say, a window A/C unit has issues beyond just powering it.

As a somewhat related aside, one thing that baffled me when I first began purchasing battery powered tools a few years ago was why they had bundles that included fans. I guess I understand the rationale for it now provided you are working in a small enclosed space with limited power like a shed.

Unable to remedy the problem with a 25,000 BTU A/C unit, my thoughts turned toward managing the heat. Resurrecting some of the memories I have left from IT work and disaster planning, I devised a heat management strategy that doesn’t really make things that much better, but it does help me systematically manage the environment. Otherwise, I might just say to hell with woodworking in the summer and instead spend my time in ice cream shops, running through splash pads, or sneaking into my neighbor’s pool.

The most important thing to have is a thermometer. Maybe I’m alone with this, but I regularly think it’s either much hotter or cooler than it really is. Taking the guess work out of what the ambient temperature is kind of important as things like heat stroke and death are usually solved by a combination of exposure time + temperature. I’ve read in some cases you don’t even realize it until you start feeling colder!

Next on the list is a portable fan. It can be as small as those cute little Vornado(s) or as big as a Big Ass Fan, but it needs to be something that can move air around and cool you down when pointed right at you. Also, don’t get lazy about moving the fan as you move around your work area, take the time to have it pointed in your general direction else you may as well have no fan at all.

Get a mask that you can breathe through. In the fall and winter feel free to break out those stuffy N95 disposable masks you stockpiled over the past few years, but for daily summer work spend a little extra and get a breathable mask that doesn’t make you feel like you are cooking your own face. Fine saw dust is generally accepted as being bad, so make sure the mask is breathable and N95 or higher. There’s lots of options out there and if you really want to go crazy try the Trend Airshield Pro.

Much like sand and glitter, sweat will get everywhere when woodworking the summer away. It does make for some nice Rorschach rust patterns on anything cast iron, but it gets a little annoying to constantly clean up. To combat this viscous venom, I found taking a trip back to the 80’s aerobic videos on YouTube provided some inspiration in arm and head bands. Fortunately, technology has progressed a little bit since those fuzzy bands were common place and you can now find silicone iterations of them which do a better job of not getting caught in a saw blade. Either retro or cutting edge, they really help keep the salty menace at bay. Now if they only made a shop version of yoga pants…

Finally, and most difficult, take regular breaks. I know that once I get going, it is hard to stop but woodworking is like a race where there is no timer, there is no place, and everyone that finishes wins. Trust me, no one is going to care if it took you one hour or three to plane boards for your next project. Funny enough, I’ve also found that taking cool down breaks has made me more efficient while woodworking. The reason being, it gives me a moment to consider what I’m working on whereby I realize that I was about to cut something either the wrong way (inverted) or I need to change out the bit I was about to cut a chamfer to the wrong depth. If you can’t take a break, then figure out if any of your work can be re-located. Build or buy (shameless plug) a portable work surface where you can dovetail, tenon, mortise, etc. outside of your shop. I do dovetails on a coffee table while binging Euphoria or watching JapanesePrintmaking on Twitch. I have a portable generator that I use to run a planer so I can make fine mulch in my backyard where it is generally quite a bit cooler than my garage. There are options out there, get creative! 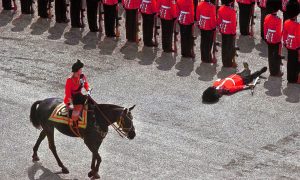 Managing heat in the summer is a real PITA party. Finding what works and doesn’t takes time, effort and a lot of patience. Frustratingly, once you have a system in place it won’t make things better they will just become bearable. Which, like 1200 grit sandpaper, is super fine. If you have an A/C equipped shop, post it in the comments below so we know who to visit!

For the February 2022 issue of Wood News Online, Temple Blackwood shared his process for turning a replacement porch post column.

One of my regular contractor customers came by some time ago with an interesting problem that he decided I would be the perfect person to help him with. An elderly customer of his had a rotted porch post column base in the front corner of her garage where it was constantly in her sight as she drove away from or back to her home. While she had no real interest in replacing the other five column bases that are in equal deterioration further back, she wants this one repaired soon with as little fuss as possible.

Read the rest of the article 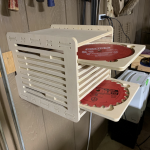 For the March 2022 issue of Wood News Online, Temple wrote about a project where he had to turn twenty-four replacement spindles for a horse carriage seat: One of my new customers wrote to me and explained that he is in the process of rebuilding an antique horse carriage and needs to replace twenty-four white […]

For the March 2022 issue of Wood News Online, Norm Reid reviewed The Stick Chair Book by Christopher Schwarz: Chris Schwarz’s latest rendering, The Stick Chair Book is a revelation and an inspiration. Even if you’ve never had the desire to build your own chair out of wood, this book might change your mind. Read […]

For the March 2022 issue of Wood News Online, Bob Rummer discusses the shelf life of wood finishing products and offers some tips and advice: When we are tempted to use old finishes, I think several factors come into play. Sometimes we don’t really know how old our finish may be. When I look at […]

The weather can’t seem to make up its mind here in Atlanta, and it seems to be that way throughout a lot of the country. 70’s one day, 40’s the next. Those of us with heat in our shop may have found more time to accomplish projects this winter compared to those with no heat […]

About 5 months ago from Highland Woodworking's Twitter via Hootsuite Inc.